Your Success is our Target

In the spring of 2020, as the first wave of the coronavirus pandemic struck Arizona, numerous Indian Health Service and tribally operated hospitals were overwhelmed with patients in need of admission and intensive care, while hospitals elsewhere in the state had available beds. The Arizona Department of Health Services deployed the Arizona Surge Line — a centralized hospital capacity-management system — to coordinate statewide transfer of patients from hospitals that were overloaded or without needed medical services to those with available resources. On May 28, 2020, Governor Doug Ducey issued an emergency order requiring all Arizona hospitals with available resources to accept patients transferred from overloaded hospitals using the Surge Line. This “load balancing” effort was lifesaving. Since April 2020, the Arizona Surge Line has facilitated the transfer of more than 7900 patients from overloaded hospitals to hospitals with beds available. Approximately 43% of those transferred were American Indian or Alaska Native.

In contrast, in the spring of 2020, New York had no statewide centralized infrastructure to facilitate transfer of patients from overwhelmed hospitals to those with available capacity. Safety-net hospitals that serve disadvantaged communities were inundated with patients, while private hospitals in the region had available capacity. Absent a coordinated public health response, it fell to individual clinicians — who were often caring for unprecedented numbers of hospitalized patients — to attempt to locate a hospital willing to take transferred patients. These efforts were often unsuccessful, and recent evidence suggests that surges in hospital caseloads were associated with potentially preventable deaths.

We believe that load balancing among hospitals is a critical public health intervention during emergencies — including severe Covid-19 surges — because failing to balance patient loads will cause unnecessary loss of life, particularly in historically marginalized racial and ethnic groups and rural or low-income communities.

A few interrelated factors underlie the risk of exacerbating health inequities. Disadvantaged groups are experiencing disproportionately high rates of infection, hospitalization, and death, largely owing to social determinants of health and baseline health disparities (e.g., higher rates of frontline essential worker status, of living in crowded locations and multigenerational households, and of chronic medical conditions that increase the risk of severe disease). Since these populations are overrepresented among hospitalized patients, the impact of any shortages of ICU or hospital beds disproportionately falls on them.

In addition, patients from these disadvantaged groups are more likely to seek care at safety-net hospitals, which have been especially strained during Covid-19 surges and, because of budget constraints, have less ability to increase their capacity for treating patients than do larger, private health systems. Patients in rural communities are more likely to seek care at small critical access hospitals, which have fewer resources for treating seriously ill patients. Therefore, such facilities will be more likely than others to need to transfer patients elsewhere to avert deaths due to shortages of lifesaving resources, such as critical care beds, ventilators, and dialysis capabilities.

Finally, members of disadvantaged groups are disproportionately likely to be uninsured or to be covered by Medicaid, which reimburses health care providers at lower rates than those used by private insurers, thereby limiting clinicians’ ability to arrange transfers through usual channels. We have already seen during the pandemic that economic considerations may keep private health systems from accepting transfers of uninsured patients, even when the referring hospital is overwhelmed.

The organization of health care delivery in the United States creates barriers to large-scale load-balancing efforts during public health emergencies. With the exception of the treatment requirements mandated by the Emergency Medical Treatment and Labor Act (EMTALA), private hospitals and health systems generally have no obligation to treat patients who are not part of their covered population. Moreover, the prospect of financial losses is a disincentive for health systems to accept uninsured patients or those whose insurance (e.g., Medicaid) reimburses at lower rates. Some large health systems worry that load-balancing interventions during the pandemic may threaten established, lucrative referral patterns with smaller community hospitals. Health systems may oppose state-mandated load-balancing interventions that they perceive as unwarranted government intrusion into private business operations.

On the administrative front, most U.S. states currently lack the infrastructure needed to implement a statewide load-balancing system, including real-time information about bed capacity in all hospitals, common reporting methods for patients requiring transfer, medical expertise to prioritize transfer requests, and a mechanism to fairly distribute patients among hospitals with availability.

But one of state governments’ foremost responsibilities is safeguarding the health and well-being of people in their states. During declared emergencies such as the Covid-19 pandemic, it is within states’ emergency powers to require hospitals to take actions to prevent excess deaths and widening of disparities. Our analysis suggests six steps that government agencies and health care systems should implement now and after the pandemic ends. Although a few states have taken some of these steps (see table), most have not. 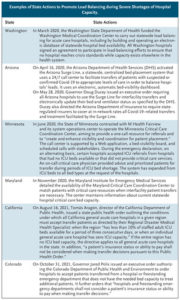 First, governors or state health officials should issue emergency orders to require all hospitals in the state to participate in load-balancing efforts during public health emergencies, including by accepting transfers of patients who are not part of their covered population. Although voluntary arrangements between hospitals to balance patient loads have been implemented in some regions, the absence of an executive order requiring participation makes these efforts vulnerable to failure in times of severe scarcity, when load balancing is most needed.

Second, public health officials should establish statewide transfer centers to facilitate transfer of patients from overwhelmed hospitals to those with available capacity. These centers should also coordinate the movement of supplies and clinical staff to areas of need. Key components include centralized capacity-management systems with real-time information about bed availability and staffing in all hospitals in the state, a standardized template for hospitals to use in reporting medical information about patients requiring transfer, and dedicated personnel to make transfer assignments. Although sophisticated Web-based applications exist for this purpose, they are not required; simple spreadsheets that are regularly updated can make statewide bed-capacity information accessible. Whether the transfer center is managed by a public health agency, a health care system, or a hospital association, clear rules should be in place to promote fairness in the distribution of patients among hospitals.

Fourth, state public health officials should refrain from permitting the rationing of medical care — including lower nurse-to-patient staffing ratios — in any individual hospital until contingency care options have been exhausted and the patient load is spread across the state’s hospitals. This step is critical for promoting equity, because hospitals that serve disadvantaged populations will probably be among the first to become overwhelmed during a severe Covid-19 surge and, therefore, the first to confront the need to ration care.

Sixth, now and after the pandemic subsides, states and health care facilities should collaboratively create binding, regional mutual-aid agreements that would be triggered when an emergency is declared. Such collaborative approaches — undertaken when all participants are “at risk” of future resource shortages — may be preferable to the exercise of state powers in the midst of an emergency.

Together, these steps represent a focused approach to promoting equitable access to health care in the midst of a crisis. Although not as comprehensive as other strategies for promoting equity, such as creating a single-payer system or increasing funding of safety-net hospitals, this approach is more likely to be politically and operationally feasible in the near term. We believe these recommendations can help government agencies and health care systems to honor their commitments to protect lives and prevent health disparities during this pandemic and future public health emergencies.

Covid-19 and the Safety Net — Moving from Straining to Sustaining Latest Medical Breakthroughs in Cardiology: What This Means For Your Patients